Q&A: What is the dispute about?

Hundreds of workers across the UK have joined disputes protesting about the use of foreign workers at an oil refinery in Lincolnshire.
BBC employment correspondent Martin Shankleman looks at the causes and implications of the walk-outs. 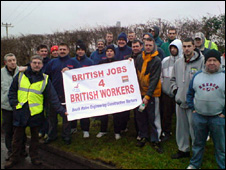 Protests have been held across the UK

What is the dispute about?
The dispute reflects union alarm that work on key infrastructure projects, such as power stations, has been subcontracted to foreign workers, and that UK workers are being denied the right to carry out the work.
It centres on a contract to extend the diesel refining capacity at a refinery owned by oil giant Total in Lincolnshire.
The contract to complete the work was awarded to the California-based engineering group Jacobs in June 2006 with a completion date of 2009.  They then subcontracted to an Italian firm, IREM, after a tender process in which five UK and two European contractors responded.
It is understood that the terms of the contract specified that IREM would be using its existing permanent Italian and Portuguese workforce for the job.
During a recession the sight of foreign workers carrying out such work is proving inflammatory to some, especially when they believe that suitably qualified unemployed UK contractors are available.
So have any UK workers lost their jobs?
Total has said that there will be no direct redundancies as a result of this contract being awarded to IREM.  It has also said that all IREM staff will be paid the same as the existing contractors working on the project.  It is understood that there are 100 foreign workers on the new project, with a further 300 to come.

But Total says that up to 1,000 workers, employed from the local community, have already been working on the project for 18 months.
Why were the jobs given to foreign workers?
We can’t be sure without seeing the contracts, which are confidential.
In a similar case involving the construction of the Staythorpe power station in Nottinghamshire, the main contractor, Alsthom, has brought in Spanish sub-contractors to carry out key work involved in installing the boiler and turbine.
It is believed one of these subcontractors has its own labour force for the work, which is specialised. In such a case, the subcontractor prefers to use its own staff.
Do the unions have a legal case for challenging the recruitment of foreign workers?
A core principle of EU law is that the UK broadly accepts the right of nationals of other member states automatically to live and work in Britain.
The UK agreed to this when it joined the Common Market, as the European Union was then known, in 1973.  So it is difficult to see how anyone can challenge the right of a foreign company to bring in people from overseas to work here.
However, Unite believes it could be illegal for companies to exclude UK workers from even being considered for job vacancies, which it claims has happened during this dispute.
What are the broader implications?
The dispute has rapidly assumed a political dimension because the behaviour of the contractors appears to fly in the face of Gordon Brown’s stated aim from 2007 to create “British jobs for British workers”.
A government spokesman said this morning that while the PM does not regret making that statement, the government would be speaking to the industry in the coming days to ensure they do all they can to support the UK economy.
The issue has also assumed wider significance because the UK’s ageing power stations system is in urgent need of an overhaul.
The Unite union reckons that 60% of our power stations will have to be replaced in the next few years. It wants to take steps now to prevent future work being awarded to firms which will bring in foreign workers.
Are the protests legal?
Any strikes called without a ballot and proper notification are counter to employment law and hence illegal.
However, the unions say these walk-outs have been spontaneous and unofficial. So they stress that while they sympathise with the strikes, they cannot support the stoppages.